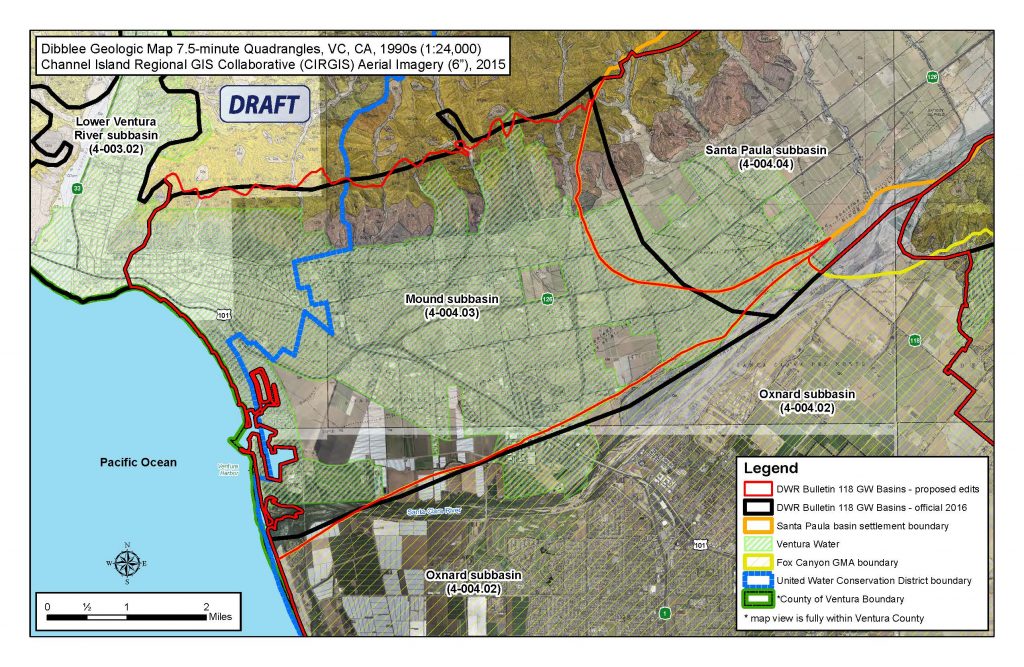 The groundwater basins delineated by the CA DWR in Bulletin 118 and used for the establishment of the Mound Basin Groundwater Sustainability Agency (MBGSA) were established many years ago using relatively low resolution data. In the intervening time period, significant new hydrogeologic data have been developed and modern, high resolution geologic mapping and aerial photography provide an opportunity to refine the groundwater basins boundaries to better reflect real-world conditions. The boundaries of the Mound basin, Fox Canyon Groundwater Management Agency (FCGMA) and the Santa Paula basin adjudication do not align on the eastern and southern extents of the existing DWR basin delineation. In places, portions of the Santa Paula basin as defined by DWR fall outside of the boundaries of all of the adjacent entities (“white areas” or “unmanaged areas”) and the Mound basin and Santa Paula basin adjudication areas overlap. The northwestern edge of the Mound basin will also be evaluated to ensure that it includes all the outcrop areas and the relevant drainage from the foothills. The County of Ventura has filed to be the GSA for the “white areas” to ensure all portions of the basins are contained within a GSA. The County’s role as the GSA for the “white areas” is meant to be a temporary situation and ultimately the County will work with nearby GSAs to transfer management responsibilities to those agencies. The basin boundary modification effort would work to eliminate the overlaps and white area(s), as well as more precisely define the areal extent of the aquifers. The proposed basin boundary modifications shown in the attached figures have been discussed by the Santa Paula Basin Technical Advisory Committee (TAC), FCGMA Technical Advisory Group (TAG), and the Mound Basin JPA creation group (i.e., City of Ventura, County of Ventura, United Water Conservation District) and the decision by these groups on how to address these boundary issues was postponed until formation of the Mound Basin GSA. The Mound Basin GSA voted to file an initial notice of potential basin boundary modification at its September 26, 2017 Board meeting. The boundary adjustments shown in the attached figures may not be the only adjustments ultimately identified for modification.